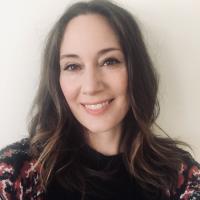 Lindsay Arnold is a multidisciplinary, Canadian-American artist living, working and creating in North Portal, Saskatchewan. Over the span of her 20 year career, Lindsay has used painting, drawing, filmmaking and
songwriting to share stories from a female vantage point. Her work, which includes artist books, paintings, videos and songs, has been exhibited and performed throughout Canada and beyond.
Lindsay is a vocalist, guitarist and songwriter. She is member of the Saskatchewan folk groups, Hook & Nail and Last Birds. Hook & Nail was nominated for a Canadian Folk Music Award in 2020 for their debut album Ghosts of Taylorton. Last Birds released their first EP in April 2021 and have since been featured on folk radio programs across North America. Lindsay recently received a SK Arts grant in support of her
most current songwriting project for Last Birds.