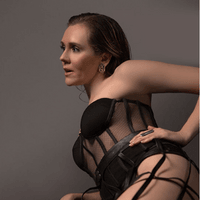 Toronto-based electronic RnB singer Geneva is a sleeper hit…but she won’t remain a secret forever. Geneva's dreamy hybrid blend of electronic, RnB and pop has been refined into a soul soothing palette of warm sonic textures, ethereal vibes and scintillating sensations; with a solid infusion of urban grit for good measure.

With a growing catalogue of past releases ranging from chill downtempo electronic, to house, to alt-RnB and encompassing collaborations with the likes of B. Bravo, Boddhi Satva, Felix Snow, Adam Tune of Keys N Krates and Lucian, Geneva has managed to defy convention while demonstrating an innate songwriting sensibility. She has referred to her sound as “futuristic throwback music”; forward-thinking and modern, yet classic and nostalgic.

Geneva’s smooth, rich tone, emotive delivery and finely honed songwriting chops put her in the same lane as some of today’s most exciting crossover artists in the pop, electronic and RnB realm.