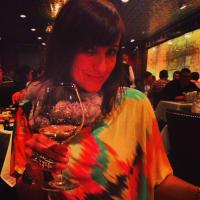 Brazilian born and raised Claudia Balladelli has resided in Canada for 20 years.
Claudia’s involvement with Mercury Lounge, a prominent Music Venue in Ottawa, Canada has evolved with a multi-disciplinary role from music programming and events co-ordination acting as a promoter and publicist as well. Speaking 4 languages makes her a natural fit for assuming the role of cultural attaché, fulfilling the incumbent responsibilities associated with the areas of international relations and artist management.
In 2016 she was invited by Heikki Eiden to represent his boutique agency: Eiden
Music Agency in Canada. Claudia assists the agency by booking, planning and executing Canadian tours for the company’s roster of bands.
In 2019 Claudia and longtime friend Yasmina Proveyer have founded Axé
Worldfest, a non-profit organization with the focus to curate BIPOC, newcomers,
2SLGBTQ+ individuals, artists w/ disabilities and those who face increased systemic
barriers to presenting their work.