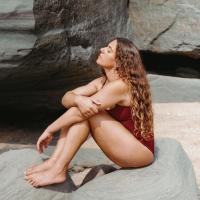 Montreal's Monika Cefis, aka 'mokina' has been soothing audiences with her singing and songwriting on a different level of satisfying since 2018, blending nuances of jazz, r&b and electronic music through lush vocal harmonies, intricate synth lines and dreamy soundscapes.
her releases have made ripples in the lofi scene, landing her in front of crowds from new-york to lisbon and on curated playlists such as spotify’s “next wave neo-soul.”
two and a half years ago, she relocated her studio to the portuguese coast where she recorded her most recent releases. ’vol. 1,’ a blend of bossa nova guitar, jazz oriented vocal lines and lofi beats, made it’s way to #1 on hypem’s popular chart, with nods from NOTION and Indie Shuffle to blogs throughout europe and the americas. the following single ‘city’ was featured through out spotify playlists new music portugal, chill total, and amongst CLASH and Dummy’s up and comers.