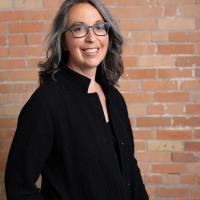 Christine Rogerson has been working in the music industry in various capacities, professional and volunteer, for nearly twenty years! Christine is the interim Executive Director for the Alberta Music Industry Association, representing and serving the Alberta music community through the management of the organization’s programming, advocacy, and export initiatives. Most recently, Christine was a Festival Manager for Live Nation Canada and responsible for the management and production of festivals including Chasing Summer, Round Up Music Festival, Oxford Stomp, and Center of Gravity. Prior to Live Nation, Christine managed the national operations for Union Events, Canada’s largest independent concert promoter, and aided the company in achieving key developmental milestones including its expansion to four offices across Canada, enhancing the programming capacity and launch of festival properties, and growing the staff team and operational capacity.