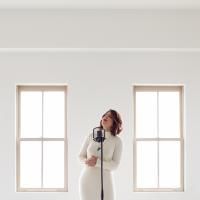 A passionate mother, wife and believer in Christ, Ileen Laura is a singer and songwriter who thrives on creating powerful and moving Christian music inspired by her deeply meaningful life experiences.

Currently working with Roberter Productions, Ileen is now working on her second EP with the internationally recognized producers Peter Wellington and Robby Riggs and looks forward to releasing her first singles from the album next year called “Sit Beside Me" and "Faith In You".

No stranger to the studio-album world, Ileen has previously released two other singles throughout her career including “Joy”, a song she wrote for her husband on their wedding day about finally being able to give her heart to someone she trusted and “Letters to my Daughter”, which outlines her prayer for her daughter, Carolyn. She also released a full length album in 2010 entitled, Mindful Conversations.

A frequent face seen around the Ontario music scene, Ileen has opened for Walk Off The Earth and Justin Nozuka and has performed with many local artists at music festivals such as Scene Music Festival. Finding peace through performing on stage, Ileen’s unique sound blends real live strings and the classical music she grew up listening to with contemporary and electronic sounds fit for today’s world.