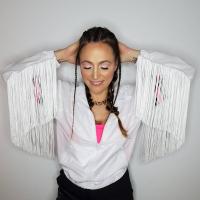 Caracol is a bilingual artist who walks her own path. Recently nominated at the Canadian Indie Awards (Electronic Artist of the Year), the Montreal-based songwriter and producer received several prizes and nominations over the course of her career: GENIE, JUNO, FELIX, MIROIR, GAMIQ, CFA.

Caracol is also active on the publishing scene, writing songs for other artists (The Voice, Star Academy, etc) and producing music for film / TV. Her single "Flooded Field" feat. Illa J was recently featured in the series "Dickinson" on Apple TV. In parallel to her own artist career, she is developing her publishing company: LADY Music.