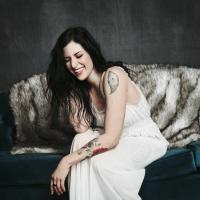 Andrea Ramolo is a multiple Canadian Folk Music Award nominee and has been recording and touring her music since 2008. Her first two records, “Thank You For The Ride’ and “The Shadows and the Cracks" had her living in her van for 3 years touring across North America playing over 150 shows a year. The latter earned her a nomination at the Canadian Folk Music Awards for Emerging Artist of the Year.

Following that, Ramolo contributed to projects by Lee Harvey Osmond (where she crossed paths with Michael Timmins from Cowboy Junkies) who produced her dark and alternative double album NUDA as well as HOMAGE - a tribute record to the late and great Leonard Cohen. HOMAGE earned her a 2020 Canadian Folk Music Award Nomination for Contemporary Singer of the Year.

Andrea’s newest work Quarantine Dream produced by Sarah MacDougall is her favourite recording to date. The project boasts a strong team of women in all leadership roles from music to video production, publicity to photography. It also features Kinnie Starr, Madison Violet, and Kathryn Calder as special musical guests among others. Andrea continues to tour the festival circuit, across Canada, and overseas in Europe and sings in both English and Italian.