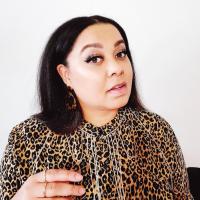 Known for her soulful vocals and captivating stage presence, Nuela Charles, an alternative-soul powerhouse, delivers a style drenched in James-Bond inspired cinematic strings, soul infused rhythms, and introspective lyrics. The singer/songwriter was born in Kenya and raised in Switzerland until the age of 6 when she moved to Canada. It wasn’t until a move to the Bahamas at age 13, that sparked her desire to sing and play guitar. She got her start recording songs when she was 17 right before moving back to Canada.

After a couple of independent releases, Nuela released her first album “Aware” in 2012. Her critically acclaimed single “Unfortunate Love” led to the beginning of steady CBC Radio support and nods from tastemakers KCRW, Singersroom and Soul Train.

Following up with her sophomore album “The Grand Hustle” (Oct. 2016), it was honoured with a 2018 JUNO Award nomination for “Adult Contemporary Album of the Year.” The lead single “Crumbling Down” landed Nuela a nod from pop culture staple The FADER and spread nationwide as it landed on the CBC Radio 2 Top 20 charts for seven weeks straight. It also added another four TV synchs to the already 15+ synchs to her name, notably on ESPN and the CW’s hit show “Jane The Virgin.”

Her next 2 releases, “Distant Danger” and “Melt” would go on to be nominated for the 2019 and 2020 JUNO Award for “Adult Contemporary Album of the Year,” counting Michael Buble and Bryan Adams as her fellow nominees.

Quel est votre pronom? She / Her