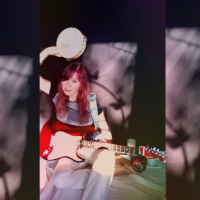 I'm the lead singer/songwriter and rhythm guitar player for my band GLIEM. I'm a prolific songwriter and have currently released a new song/video called 'Wind Shield Love'. I love to write and create original music, and it's something I focus on, whether it's just me and my guitar in the quiet realms, or in front of an audience. Some recent events :
* Released music on and became a member of Tr1be Music streaming platform
* Performed at All Folk'd Up Music Festival
* Performed on Telemiracle
* Music Videos featured on SaskMusic
* Performed on Ness Creek Music Festival VirtualNess
* Performed an original song called "Holding" for an International Indigenous Peoples' Day concert aired on SaskMusic
* An original song called "Grand Design" was selected by Tr1be Music and The Frog Radio for the official Indigenomics playlist
* Featured artist in the 'My Music" section in The Prairie Dog and Planet S Magazine
* Radio play including The Frog Radio, Music Is The Medicine, The Alternative Music Show on Aspen Waite Radio, Tang Radio Edmonton