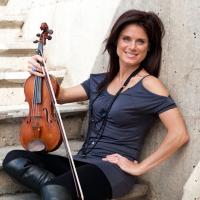 Nathalie Bonin is an award-winning violinist and composer from Montreal, Canada now based in Los Angeles.

Nathalie is a composer and soloist for the “Women Warriors: The Voices of Change” concert and documentary. She has scored the music for five Hallmark movies, short films and television series in various genres as well as numerous theme songs and soundtracks for worldwide audiences. Her compositions have been licensed on Netflix, CBS, TF1, BBC, RTS, PBS, ESPN, MLB, Radio-Canada and NBC including the popular series “New Amsterdam” and “The Oprah Conversations”.

Nathalie holds dual citizenship (USA/CANADA) and is Founder and Owner of Kinémuse Productions inc. in Montréal, Canada since 2015.