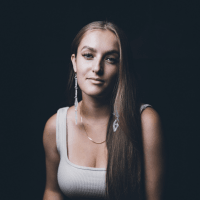 For more information contact us
This email address is being protected from spambots. You need JavaScript enabled to view it.
Copyright © 2023 Women in Music.
All Rights Reserved.